Last night I headed up to Tripoli to catch a game of rugby league. The Lebanese national team was playing the Italians as part of the European Cup (don’t ask me why Lebanon is in the European cup). But given that 15 of the 20-man Lebanese squad are Australians, and a few of the Italians were as well, it was almost like being at home. I haven’t been around that many Australian accents for ages!

Of course this being Lebanon it started a bit oddly. As I drove up to the stadium 20 minutes before the game was due to start at 8pm, the whole complex was pitch black. I wondered if I’d picked the wrong night maybe, or perhaps the wrong stadium? No, just your run of the mill power cut – right in the middle of the under-16s warm up game!

The power was soon restored (it had been out for 30 minutes apparently, leaving the kids on the paddock to get up to god knows what kind of mischief) and I was into the stadium ready for some action. As kick-off occurred I was filled with fond memories of the old man and me standing on the hill at Leichhardt Oval, yelling our heads off to encourage Backdoor Benny (born in Tripoli), Blockhead, Sirro and the other Balmain cohorts across the try-line.

Sadly, there were no soggy hotdogs and plastic schooners of Tooheys New available.

Even worse, within about 30 seconds it became clear the game was a little one-sided. How shall I put this? Lebanon won 86-0. A close game by all accounts!

Nanna’s here again, and since there was a recent change to the travel advice taking Tripoli off the highest risk category, we decided to head up there yesterday to have a bit of an explore.

Tripoli is Lebanon’s second largest city, located on the coast near the northern border. Much of its history is from the crusader and Mamluk eras. It’s got an awesome citadel (the Castle of St Gilles), lots of mosques, an old bazaar (including a fascinating soap market, the “good smell of Lebanon”) and traditional middle eastern chaos. There is much more of an Arab vibe in Tripoli than Beirut – it feels more like Damascus or Amman (except it’s by the sea).

The visit this time was reasonably brief. First stop was the citadel. When we told Mitchell that we were going to a castle, he replied: “With a princess?”. How cute is that?

We enjoyed exploring the various nooks and crannies, although unfortunately it wasn’t very accessible so we could only get Sheridan’s chair a short way in.

Afterwards we grabbed some lunch, then spent some time negotiating through the hussle and bussle of the old city. When the call to prayer came it was a deafening crescendo of competing mosques. We finished off with a quick stop at the Hallab sweets shop for some excellent baklava.

Here are some photos that I took in Tripoli last year. 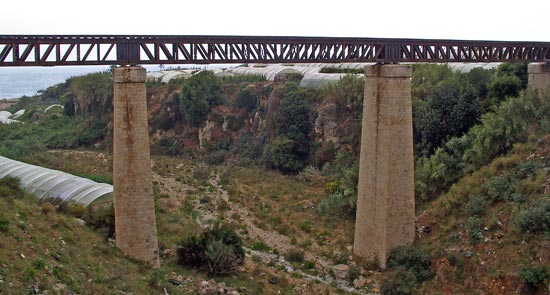 During the Second World War Australian military engineers played a key role in the construction of the main railway line running through Lebanon from Tripoli in the north to Haifa in Israel. This bridge is located just north of Byblos and is one of the few remaining examples of this rail line, most of which has now been built over.

Here you can see the Australian Commonwealth Military Forces insignia. 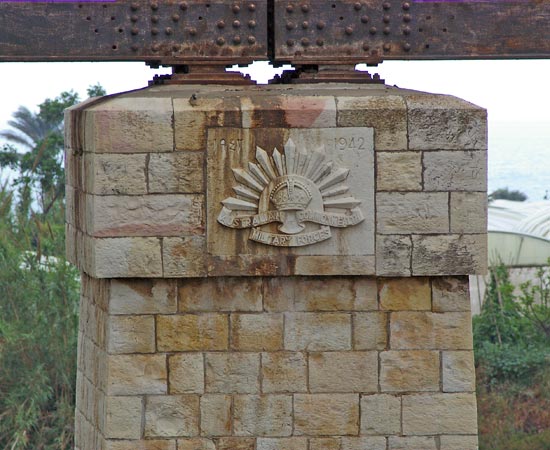 I recently posted with photos of disused steam trains in Tripoli, here.  I’m not a trainspotter, honest.

Some more info on Lebanon’s old rail network can be found here.

Sitting next to the port in Lebanon’s second largest city, Tripoli, is a disused trainyard. The yard was part of an extensive rail network built by the Ottomans in the 19th century and running throughout Lebanon. Lebanon had the first railway in the Middle East, opened in 1895. This network ran along the Lebanese coast from the northern Syrian border all the way to Haifa in Israel, and also extended up through Mount Lebanon. It linked up with the famous Hejaz Railway, which connected Damascus and Medina and was the railway blown up by Lawrence of Arabia.

However since Independence in the 1940s sections of Lebanon’s railway were slowly disconnected or built over. The 1975-1990 civil war saw most remaining infrastructure and trains destroyed. All rail links into Lebanon are now severed. (Amazingly, I’m told there are still over 200 people employed by Lebanon Rail, even though there’s been no train movements in Lebanon since the early 1980s).

Sitting in the Tripoli railyard are a number of old steam engines, which according to Robert Fisk (see here) were originally from the pre-First World War Reichbahn and were transferred from France to Lebanon during the French mandate period.

Sadly, as you can see here, they’re in terrible condition and are rusting away. Thomas the tank engine would not be pleased, and nor would the fat controller!

One very easy daytrip that you can take from Beirut is to the ancient city of Byblos. Located about 35km north of Beirut, Byblos is often described as the oldest continually inhabited city (although Damascus, Aleppo and some others also make the same claim – see here).

Another claim to fame is that writing was invented at Byblos and the name of the bible is attributed to Byblos.

These days, the old city of Byblos is a beautiful little village on the Mediterranean complete with a sheltered port, crusader castle and several quaint restaurants overlooking the water (including the famous – but highly overrated – Pepe’s restaurant). It’s a lovely spot to wander around and enjoy the history.

We’ve been doing lots more exploring while Nanna’s here. On Saturday we drove north up into the mountains to visit the Bcharre (pron: BESHARAY) region and to see the famous Lebanese cedars. Then on Monday we headed to the southern city of Tyre (pron: TEER).

Bcharre is one of a number of towns on a ring road around the gorge-like Qadisha valley – known as the Holy Valley because of the number of monasteries, churches and hermit caves there and the Syriac translation of qadisho as “sacred”. The scenery is really dramatic, with all the townships clinging to the sides of the steep valley and the middle east’s tallest mountain, the snowcapped Cornet El-Saouda, towering overhead.

The Bcharre district is where famed artist and author Khalil Gibran (third bestselling poet after Shakespeare and Lao Tse) was born, and it was a major centre for migration to Australia (everyone there has a family member who lives in Australia).

Having done a recce to Tyre several weeks ago, we decided to take Nanna to southern Lebanon to explore the ancient Phoenecian, Greek and Roman ruins of this city which dates back to 3000 BC.

First stop was a drive past the Crusader Castle at Sidon harbour, then a detour when we spotted a toy shop selling kids bikes (Nanna wanted to buy Mitchell a bike, so that he could inflict more damage on our furniture). We then continued south to Tyre, a squeezy drive through the old city and stopped at the ruins of the old Roman port. The beautiful mosaic road runs straight into the sea, where a large section of the town’s sea wall has now vanished under the Mediterranean. You can still go snorkling among Egyptian and Roman columns on the sea bed.

We next took advantage of the beautiful Spring weather to go and sit on the beach. Sheridan did very well walking along the soft sand (with a little support from Alex and Nanna) and Mitchie had a great time digging out sandcastles and throwing spades of sand into our faces. Oh how we laughed!

As the afternoon lengthened we ventured on to a neat little ice cream cafe overlooking the sparkling sea, with the Israeli headland 20km to the south. The proprietor looked at us like we were the most boring people he’d met as we each ordered a two-scoop ice cream. The reason for this quickly became apparent, when a Lebanese couple ordered a giant plate covered with sliced fruit, about 15 different flavours of ice cream, assorted toppings and with wafers and other crap sticking out all over the place. It was completely outrageous. Still, we were fairly content with our piddly little ice creams (until the next morning, when Sheridan and Nanna copped a bit of food poisoning).

Final stop before returning to Beirut was the Al-Bass archaeological site, which contains a Roman cemetery, a triumphal arch, and the largest Roman hippodrome (think chariot racing in Spartacus) ever discovered.