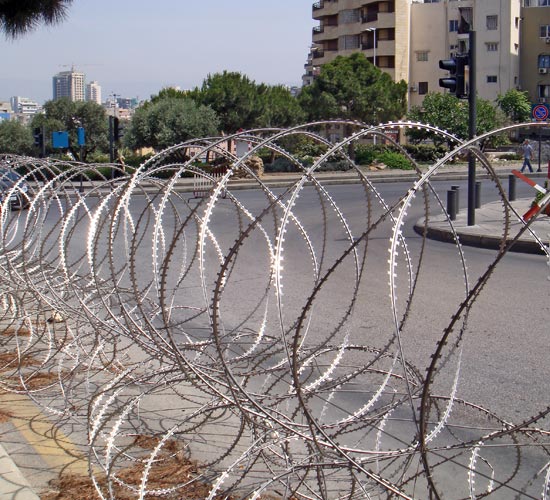 In case you haven’t seen it in the news, Lebanon’s politicians have reached a compromise agreement to end the 18-month deadlock that has paralysed the country. The deal should see the election of a president on Sunday and, hopefully, will allow for a return to normal government in the lead up to the 2009 parliamentary elections.

The most immediate impact of this decision was an announcement by the opposition that the tent city protest in downtown Beirut will be packed up – something we never really expected to occur during our stay in Lebanon.

This is going to be such a shock for us – we’ve only known the tent city, which sectioned off large parts of downtown and had killed this previously vibrant part of the town. For Alex it was a particular drag as the security measures put in place to guard the government offices from the protesters also made it impossible to walk the short distance down to the cafes of downtown – seriously curtailing his ability to get a cappuccino and muffin for morning tea each day!

So anyway now that the protest is packing up it looks like the additional security barricades will be going too.

We won’t know what to do with ourselves if we have unfettered access across downtown!

To mark the occasion, here are a few photos of the tents being dismantled.

One thing you can say about Lebanon, it is never boring! I thought I’d post a few of the images doing the rounds from the current civil strife, plus a couple I took as well. Most of these are from the yalibnan website (though be warned, some of the photos on the site are a bit gruesome).

In case you’ve seen reporting about the fighting in Beirut over the past few days (eg this reuters report), just wanted to reassure you that we’re all fine.

Fighting has been concentrated in the Sunni suburbs of west Beirut, several kilometres away from where we live, and has mostly died down now. So far it all seems pretty exclusively Sunni vs Shia, explaining why our neighbourhood, which is Christian, has been spared.

In fact it is quite surreal being in Achrafieh through all this. I ducked out to get a few supplies yesterday and the shops were open, people were going about their business, walking dogs etc. Yet there was the constant staccato chatter of machine gun fire and thundering booms of RPG detonations echoing across the city. Madness!

After several months of calm and tranquility, today was something completely different.

Originally planned as a national strike calling for an increase in the basic wage, we ended up with tyre burnings and barricades in the streets, as well as gun battles and torched cars. Most of the action focused on the border suburbs between the Sunni and Shia neighbourhoods of Beirut – which are thankfully quite removed from where we live.

Work and the schools were closed for the day and the streets were largely empty. The airport has been blocked off by protesters who’ve constructed barricades out of earth and debris. Check out this Reuters post for more info.

Who knows when things will get back to normal? For the time being we’ll definitely be keeping our heads down and spending some “quality time” at home…

Life in Beirut is rarely boring!