To fully round out the crusader castle festival that is the Syrian mountain range, and having already explored the other end of the chain in Lebanon (eg Tripoli citadel and Beaufort castle), I headed back home via the coast road to take in Qal’at Salah ad-Din and Qal’at Marqab. 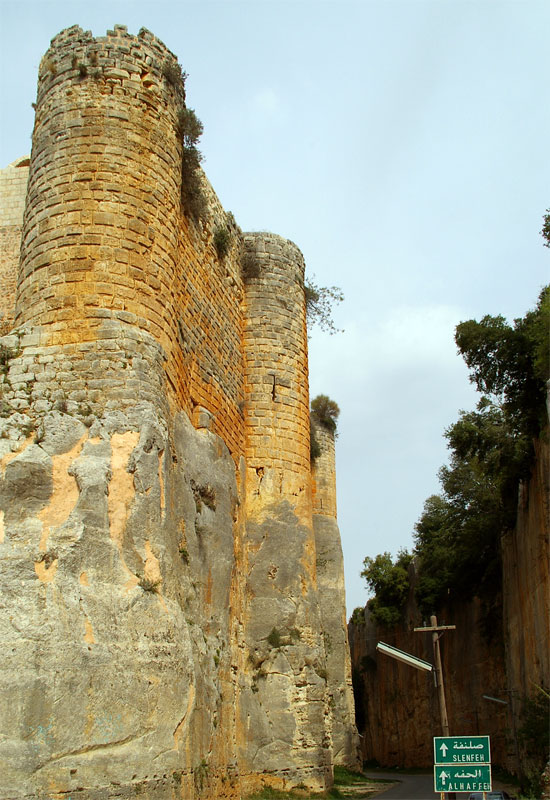 Qal’at Salah ad-Din, or Saladdin’s castle, is perhaps the second most impressive fortification in Syria after Krak des Chevaliers. It isn’t nearly as well preserved, with much of the interior in ruins and overgrown with vegetation. But the outer walls are quite impressive, and it had the most striking access route. As you can see in the following photos, the only access to the castle in medieval times was across a drawbridge which spanned a plunging gap in the mountains. What’s even more amazing is that the gap is man-made. The castle’s builders carved that slash out of the basalt rock. And yet despite this, the castle was captured by Saladdin in 1188 (hence the name).

As I explored Qal’at Salah ad-Din I couldn’t help but think how it would be the perfect place to take Mitchell in 5-6 years time. It’s full of mysterious tunnels, hidden stairwells leading to isolated turrets and evil looking arrow slits, where you could run around pretending to defend the castle from dragons and marauding hordes of orcs. Mind you it’s also full of precipitous drops and without any safety rails…

Heading on, my final stop was Qal’at Marqab, which is perched on a hilltop overlooking the coastal city of Baniyas. Marqab is in worse condition than Salah ad-Din, and unfortunately the exhaust belching out of the large power-station below the hill was drifting right across the castle. So rather than venturing in I just snapped these pics on my way past.

But it makes me wonder – what is it with castles and cactus in this part of the world?

And onwards to Aleppo. But since it’s a fair drive from Krak des Chevaliers, why not a quick stop enroute at the dead city of Serjilla? 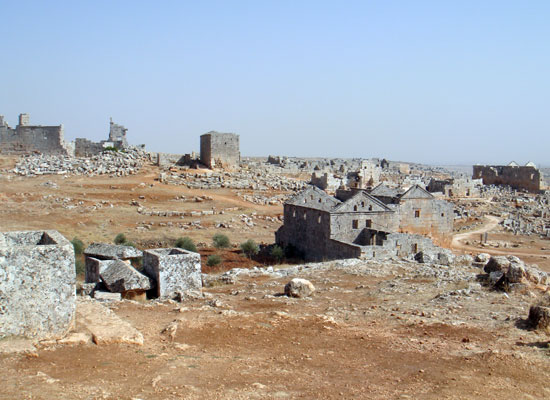 What are the “dead cities”? Well, as wikipedia will tell you, the dead cities are a collection of settlements south of Aleppo dating back to ancient times and completely abandoned for the past 1500 years. Unlike most ancient ruins, which tend to be filled with grand and impressive temples, ampitheatres, columns and statues, the dead cities look more like recent ghost towns. The buildings are pretty similar to our own – there’s lots of two storey terraces with A-frame roofs for example.

Aleppo, the second largest city in Syria, is most famous for two things: its market (the souq), and the ancient citadel that towers over the whole city. It has been occupied continuously since about 5000BC, making it one of the oldest cities in the world.

At the heart of the city is the citadel. The castle crowns an extraordinary hill jutting out of the ground, almost as dramatically as Uluru. Although there’s been fortifications of some form here since the 9th century BC, the current citadel was constructed in the 12th century.

While the exterior walls are well preserved, the same can’t be said for the interior. Much of the top of the citadel is rubble or poorly executed renovations, including an ill-advised concrete faux-ampitheatre.

Looking beyond the citadel, Aleppo’s Omayad mosque is only 15 years younger than its cousin in Damascus, dating originally to 715AD. Yet while the minaret is original, much of the rest has been rebuilt. Still, it’s a beautiful spot.

With a few weeks of bachelorhood up my sleeve, I decided to head north across the border into Syria. My ultimate destination was the northern town of Aleppo to explore the souks and its famous Citadel. But first stop was the incomparable Krak des Chevaliers. 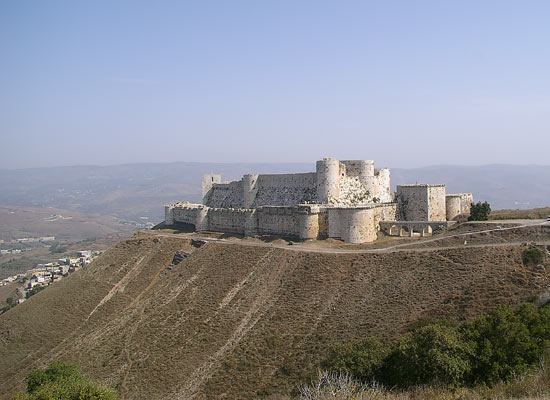 Krak des Chevaliers (Qal’at al-Hisn in Arabic) is just over the northern border between Lebanon and Syria. It was originally a smaller Kurdish castle, but was captured by the Crusaders in 1099, then again in 1110. It was strategically significant during the crusades, as it overlooks the only real mountain pass along the coastline from Turkey to Israel. The crusaders considerably expanded the site, so that it eventually became the largest castle in the Middle East and the headquarters for the Knights Hospitaler, housing a 2,000-strong garrison.

For a castle-nerd like me, Krak des Chevaliers is just extraordinary. It is almost completely intact, and was described by Lawrence of Arabia as “perhaps the best preserved and most wholly admirable castle in the world”. It’s importance as one of the most complete medieval castles led to it being listed as a UNESCO world heritage site.

Exploring the castle, you quickly see how it dominates its surroundings. The complex is huge in size and it looks completely insurmountable. In fact, given how well-designed and formidable the castle is, it’s hard to believe that it was successfully captured by the Mamluks in 1271 – although this was only possible when the castle was hugely undermanned (only 200 knights).

With Christopher in town for a few days, he and I decided to have a boys weekend away. Sadly, the girly bars and super nightclubs of Beirut were off-limits, so instead we opted for the historical choice and drove over to Damascus.

We opted to stay in the Beit Joury hotel, a 300 year old palace which had only been converted into a boutique hotel last year. The hotel was in the centre of the Christian quarter and an easy walk to all the main historical sights. From there we wandered leisurely, munching on a falafel roll (very tasty, but not quite as good as my favourite, Sahyoun, on the old Green line), scoffing down a monstrous cone of vanilla icecream covered in pistachio nuts from Bakdash, then later on sitting and whiling away an hour over some sweet black tea and a nargileh pipe.