On Nanna’s last weekend here we enjoyed a nice drive up into the Chouf mountains (last visited in June). A particular highlight was exploring the lovely Beiteddine Palace, which as you can see here, is still officially the summer residence for the Lebanese President (though is not actually used as such). It’s a wonderful old Ottoman palace built in the early 19th century, and unlike many historical sites in Lebanon it has been carefully and tastefully maintained.

After our explorations we headed a little bit further uphill to the Mir Amin Palace Hotel, another former Ottoman palace. The hotel has a great restaurant on the courtyard, which as you can see here has a terrific view out over the valley down towards the distant Mediterranean Sea.

We ambled up without making a booking and quickly feared that we’d have no chance of getting a table. But the waiter looked at Sheridan with her sticks and decided what the hell, we could have the reserved head table looking out over the valley. So we had a delicious lunch of Lebanese mezze and nargile (Alex’s little vice), enjoying the view and the wonderful cool breeze.

[Update November 2011 – Wally, click on the following picture for a large format version] 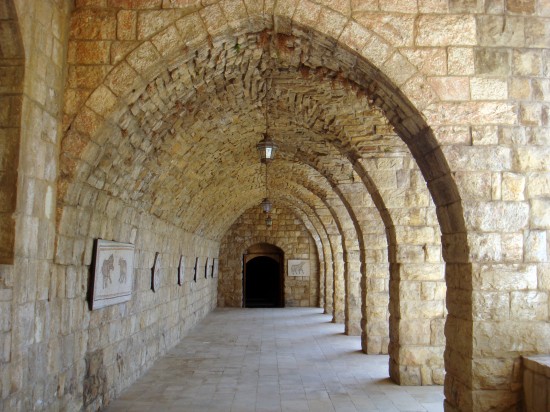 4 Replies to “Daytrip to Beiteddine Palace”

This site uses Akismet to reduce spam. Learn how your comment data is processed.